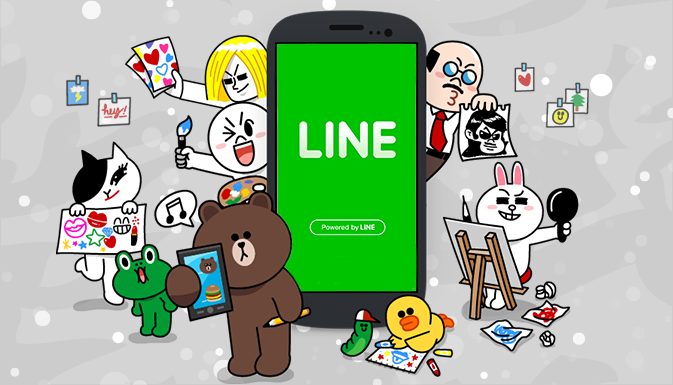 Throughout the history of mankind, every new form of communication created its own simplified, reduced version for the sake of deepening content. TechCrunch author, Catherine Shu, posted a paper on this and on the connection between Line and shorthand typing.

Stickers are an integral part of Line messaging app

Renaissance paintings are full of symbolism: any object, even of no significance, is, actually, full on allegory. In the Victorian age, folded corners of calling cards conveyed a multitude of emotion varying from congratulations to condolences. The first telegraph clerks developed a coded lingo system to protect their heavily-engaged “morse clicker”. 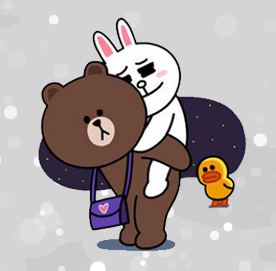 In our days, stickers are an equivalent of the aforementioned shorthand, and, as we all know, stickers are an integral part of Line messaging app – a communication client with over 250 million supporters.

Catherine lives in Thailand, where a lot of people switched from WhatsApp to WeChat or Line around three years ago, largely thanks to emojis and stickers. Initially Catherine thought that stickers are completely useless. Meaning, why would anybody want to waste time flipping thought a library in search of a single sticker that might not even be there, when you can type up a reply in no time?!

Then Catherine saw a few stickers and it hit her: she was way off! Just like Renaissance symbols, Line’s stickers express a deep, complicated array of ideas and emotions. Moreover, some of them are often mixed into fun and unusual constructions.

Line spends huge amounts of money on transforming the app into a “lively” platform full of functions like ordering and delivering food to homes and streaming music. Competing apps, such as WeChat, KakaoTalk and, more recently, Facebook Messenger, are also adopting the strategy of maximum retention.

Nonetheless, stickers and games are Line’s main source of profit. Line organized an event for creative people, who were welcome to upload and sell third-party stickers – the so-called Creator’s Market. The event gave Line a $75 million profit in its very first year. 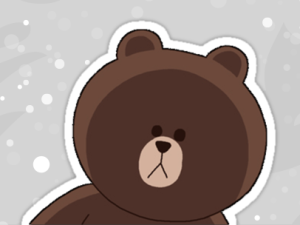 According to data voiced in connection with Line’s four-year anniversary, 2.4 billion stickers and emojis are sent between users every day. Around half of them, 48%, are cheerful, while the rest involve all sorts of feelings, like sadness (10%), rage (6%) and surprise (5%).

Many people in the United States and other Western countries make the same mistake that Catherine did, thinking that stickers are just for show with no other purpose. In a recent article devoted to the upcoming IPO Line, Bloomberg labelled stickers as “teddy bear icons”.

However, too bad it ain’t all that simple: many stickers are designed in the style of kimo-kawaii – an interesting fusion between kawaii (cuteness) and (kimo) strong, negative emotions.

Despite the fact that kimo-kawaii is a relatively new trend, its roots go deep into the Japanese pop culture. Another character is Gloomy Bear, created with the sole purpose of being the exact opposite of Hello Kitty. Plus, there’s always Gudetama – a constantly depressed egg.

The million dollar question stands: is Line up to the task of translating its content into languages, spoken outside of the already dominated Asian market that includes Japan, Taiwan, Thailand and Indonesia? To recap, the Asian market accounts for more than half of Line’s users, and this is central in light of the app’s approaching global release.

It doesn’t make a difference how successful the company’s business strategy is – Line stickers will remain the benchmark of how a tech firm launches and promotes cultural trends, such as characters, with the goal of attracting more users. Who would have thought that these characters would end up living a life of their own?

Stickers: what is under all that cuteness?

Although Line’s characters belong to the kimo-kawaii group of stickers, nothing beats their adorability. A teddy bear, a white rabbit, a green frog, a yellow chicken – are all very multifaceted creations. They could, of course, be up to no good in the sticker packs – drinking booze or beating up a stranger – but in Line’s brand shops, available across the territory of the dominated Asian market to spread the love for the communication app, you’d have a hard time telling them apart from Hello Kitty. 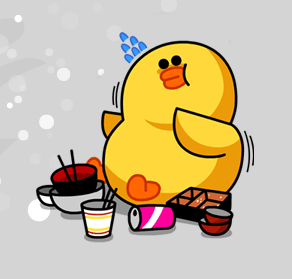 Line knows what stickers are more popular than others, but they haven’t got a clue how people react to them. It is risky, but at least designers don’t feel crumpled up in a box. The company has a no-preparation policy, in terms of demographics, when it comes to batching up new sticker packs. When the messenger was just starting out, its main target audience was female high school students – so, basically, Hello Kitty’s target group. The app grew in popularity and sticker packs started popping up left and right. For example, “Moon’s Job Hunting Story” was released in the beginning of spring, at the beginning of the fiscal year. It is no coincidence, for many professionals are currently seeking new employment opportunities.

As of today, Line offers 140,000 sticker packs and 6,830 emoji. Meanwhile, the company is thinking long and hard on how to make money from these packs in countries, where the app is yet to see the success it saw in Asia. In a move to strengthen its position, Line recently rolled out the Emoji Keyboard, aimed at attracting other markets. The keyboard is fitted with 3,000 stickers and emojis. Should the idea become a success, it will be able to reel in users to use Line’s other in-app projects like aillis (Line’s camera with photo filters), games like Line Rangers, and even software like Line Antivirus and Line Tools.

Stickers serve as a cohesive mechanism or a bridge in texts, if you will. They require less effort when it comes to transmitting info: even less than GIF images or emoticons. They help you express the emotions that words can’t (or don’t need to) express.

Other applications have also fallen under the influence of kimo-kawaii, like Facebook with its HamCat and Sinister Oyster collections.

Nevertheless, Line stickers stand out among the crowd, because each and everyone of them breathes life — a quite complex one or, well, at least enough to become the basis of a cartoon series Line Town and a series of manga comics. 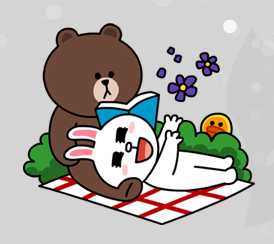 Many stickers are rather nice and charming, while others are at times cruel and inhumane. Take Sally, for example. She has had bad cases of alcoholism and cannibalism. The company is actually keeping such sensitive issues under strict control – countries with a Muslim population aren’t offered stickers with drunk characters.

Naotomo Watanabe, head of sticker planning in Tokyo, said that the characters’ lifelines arose by chance. He added that initially there were no plans to create a series of characters. We were looking for the best possible solution to convey emotion. Moon was one of Line’s original creations and he seems to be the perfect image to demonstrate emotions.

Next time around, Line thought to make them more personal; hence the male and female characters – Cony and Brown. As the number of sticker packs began to grow, so did the relationship between the two. Long story short, Brown, a stoic bear, and Cony, a white rabbit obsessed with romance, engaged in many romantic activities.

Another character is Sally, a small yellow chick, who isn’t the happiest chick in town by a mile. Unfortunately for Sally, she is constantly getting picked on by other character.

Now don’t go thinking that the drama is over – newly created characters are bound to add some spice and flavor by interacting with one another, and we all know how that story plays out.