GetGems is a free messaging app for Android and iOS. The messenger’s main goal is to let its clients enjoy simple, free, secure and profitable messaging.

Profitability is the feature of GetGems. The messenger sets itself up as the first mobile application that pays its clients. GetGems allows using a widespread cryptocurrency bitcoin as well

as its own currency – gems.

The messenger was created by Israeli developer Daniel Peled.

How do you earn gems?

The scheme is a simple one: a user gets gems, makes online purchases, and then exchanges them with friends in the application.

A user can also earn gems directly in the messenger: all efforts on expanding the application’s user base are rewarded. GetGems pays 25 gems for each friend you invite who starts using the messenger. 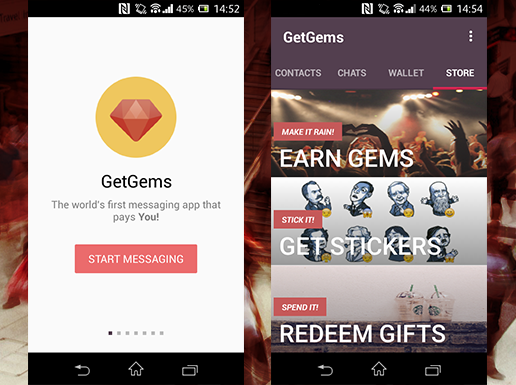 On average, the application gives awat 27 500 gems to its users daily.

You can exchange cryptocurrency for real money on BRER and Poloniex at a rate of $ 0.01 per 1 gem or spend it on Amazon, iTunes and Ebay.

What is new about GetGems?

To a large extent, GetGems is made based on Russian Telegram. It differs only by the built-in Gems and Bitcoin wallets.

Users can take advantage of free and unlimited messaging and simple exchanging of the said cryptocurrencies. 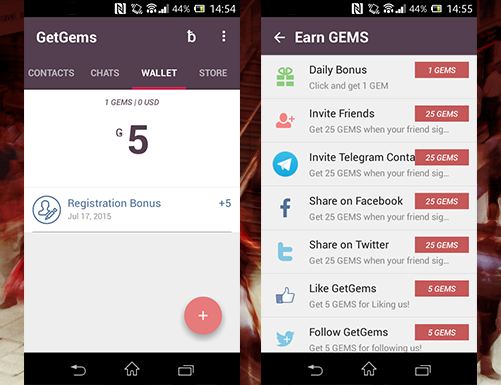 Since the messenger acts as a digital wallet, it is highly protected from hacking. If you have your cell phone stolen you can still recover the funds using a personal recovery passphrase.