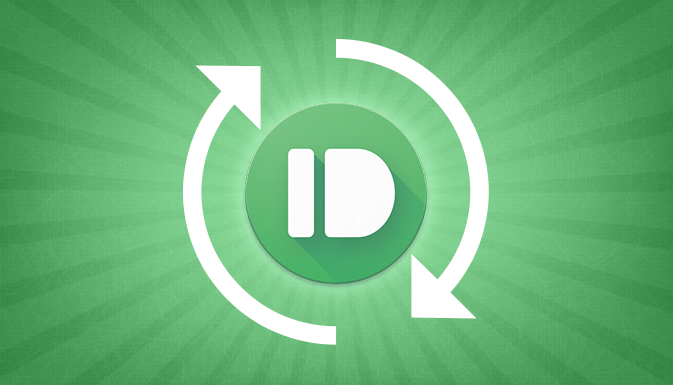 Home » All messengers » Other » RADICAL UPDATES IN PUSHBULLET APP

On June 30, the Pushbullet messenger team proudly announced the completion of the largest update in the messenger’s history. It should be noted that updates of such a big scale are a rare thing to happen to any modern product, since updates, improvements or adjustments were almost in everything in it. But let’s discuss it all step by step.

The changes the team made here can almost be called revolutionary. Basically, the messenger team has taken apart the whole message and then – put it back together. The annoying list of messages set in a chaotic order is gone and now messages are split into categories based on the principle who the sender is. This is also true about messages from friends and channels that the user is subscribed to. From now on – as the developers claim and users sincerely hope that it is true – finding a single message will be much easier. 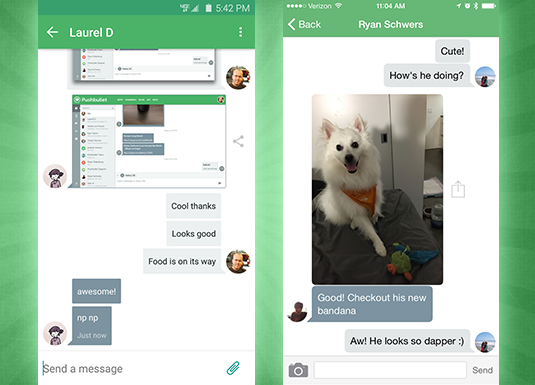 By tapping on a friend icon you will be able to look through the message history window and also, this will enable you to send this friend a message or a file. Your friend will be notified regardless of the device he/she is currently using, be it a smartphone, tablet or a desktop.

There is a new Me section. It collects all the content that the owner exchanges between his/her devices.

The way you now can receive a message from a friend and reply immediately has become clear and convenient. The development team, when mentioning the changes they made, noticed that correcting this window was a matter of honour.

Pushbullet extensions for the aforementioned browsers allow one to look through the message history. The process of sharing links and exchanging messages is now as simple as possible.

The developers have also added an interesting functionality: you can pop-up fresh chat windows and continue chatting in them. These two windows support file sharing, you just need to drag a file into the dialogue window and thus send it over to the recipient. 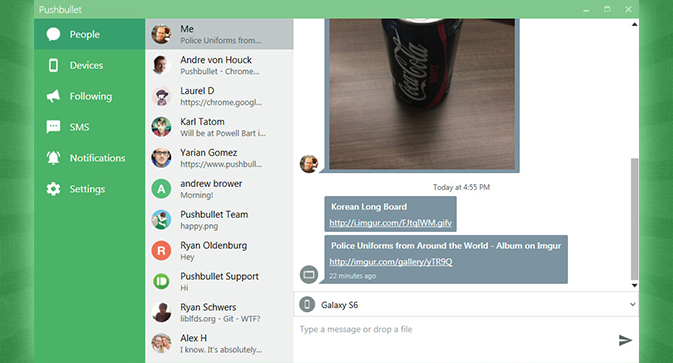 The new app version controlls how well messages are sent. Should anything go wrong, you will be notified and will be able to re-send the message.

The Pushbullet Windows desktop version has been significantly adjusted too.

The creators of the messaging apps admit that they had to deal with tonnes of bugs. They all have been eliminated, though. Now there is also an option to share several files at a time.

Now Pushbullet can boast quite an original feature: chat-heads are now in the desktop app too. According to the developers, they were the first to introduce chat-heads into the desktop version of the app. The special thing about these chat-heads is that the minimized chat will follow the user in other windows too; the same will happen if he/she starts playing games.

I.e. the user does not lose the thread of the conversation, nor does he take long to reply – he does not have to press Alt+Tab to return to the chat window. You will be notified of a new message while watching videos on YouTube or playing games. 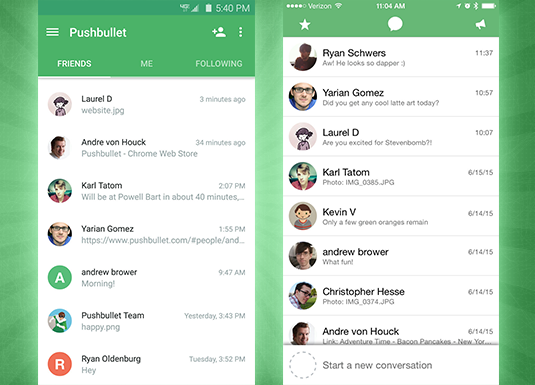 These “heads” can be used not only for minimized chats with friends. You can also use these chat-head for any other of your gadgets. This way it will be much easier to send files to your smartphone.

You can find all the updates on the new website of the Pushbullet messenger too. Now the site is much easier to use – navigation is now much more convenient, and you can change the size of the screen too.

Also, the website can help you to highlight, drag over and send plenty of files. Android users can send messages from the website without having to sign in.