NDER – DISCOVER ANYTHING ABOUT ANYONE

Home » All messengers » Other » NDER – DISCOVER ANYTHING ABOUT ANYONE

The NDER app is meant to get hold of information about potential dates.

However, it will also be good for those who are already in long-term relations – to make sure that the partners are loyal to them. 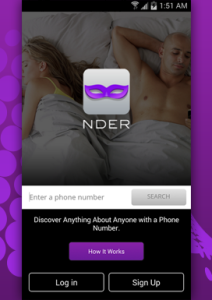 The concept of the app is simple (as all genius things are, basically): you just need to put the phone number of the person you are dating tonight or your long-term partner into the app. If this number has been input into NDER before, then a private chat room will be arranged for these users where they will be able to exchange information about this person, discuss risks or chances.

The goal of this app is to provide assistance to those who want to find out more about a new friend they have made online and to those who have already been dating a person for a long time to get to know him better. It is quite logical that if you have just met a guy and you have his phone number, it is easy to check. After all, a person can introduce himself/herself with a false name, can give you another person’s business card. But a phone number means you have a key to its owner.

NDER efficient tool for protecting yourself

Considering that dating apps like Tinder and Hinge are growing more and more popular, misinforming others has become an important issue for many people. If someone they have met online is married or has children – wouldn’t you rather find out about it as early as possible? This is when NDER comes to your aid, offering an efficient tool for protecting yourself from being taken for a ride on the Web.

Robert Rivany, the president and co-founder of the startup believes that the idea to set up NDER came from watching the rising popularity of dating apps. In his opinion, it is obvious that many users of these apps deceive their potential dates, so NDER is a perfect instrument for establishing it.

The development team says that their major goal is to prevent users from becoming heart-broken. All the descriptions insist that you can use the app anonymously and no one will ever be aware that their partner or date is checking them.

In theory, there are no bones to pick with the app – the goal is noble and it is well implemented. There are two important details, however: there can be a lot of misuse from evil-wishers. There are also no legal monetization strategies. The app does not have and it cannot have the pre-moderation of the input phone numbers and so can be used for evil purposes.

Rivany also notices that he and the team just wanted to create a digital society where people would be able to exchange information about their mutual contacts and be confident that their future date will be smooth and honest. 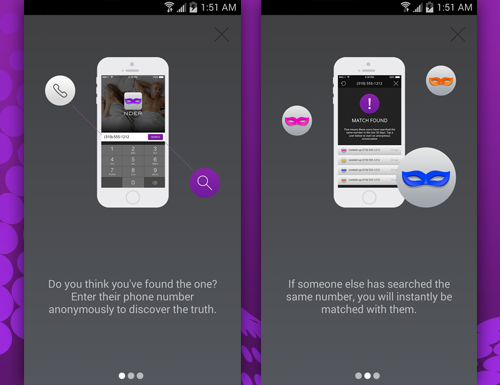 On the other hand, it is not quite clear how the developers plan to make income on the app. The paranoia of jealous spouses or partners will surely get them to use the app constantly – to input their other half’s number constantly and expect a match to be found. Despite it, there is no way we see any real profit that can be made from this app. Apart from, maybe, paid service of removing phone numbers or other illegal services.

The attracting of active users and increasing their number remains NDER’s main issue. Until the user base contains several thousand numbers, all attempts to become a popular app for downloading will be useless.

Glamour magazine has published an article about the app that works on iOS and Android devices. This one of the biggest US women’s magazines has given NDER a high esteem and justified it by saying that NDER is not an app for stalking guys but “a tool of honesty”.

It’s worth noticing that despite the good prospects and the good functionality of the app, the App Store and Google Play contain quite moderate feedbacks so far. Apparently, users are waiting for more people to register their numbers there.