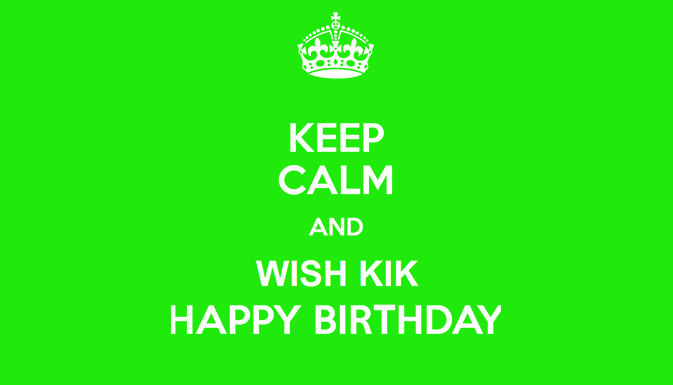 Can you believe it? KIK is 6 years old! This is a good reason to recall all the key points, updates and achievements that a tiny group of just 30 developers made for 200 M users.

KIK runs on such platforms as iOS, Android, Windows Phone and Amazon. Since the time of its previous birthday, the messaging app rolled out 20 updates for iOS users and 21 updates for Android users.

The best upgrades implemented by KIK during the year included:

These are only KIK’s technical achievements. During this year, the development team conducted a campaign to implement promoted chats. The most interesting deal of KIK-chats was the Eyegroove group chat with newly released music videos, group chat Racked, the chat of a social portal DoSomething.org, group MTV chat, the Jam music community chat and also plenty of mobile gaming group chats.

Also, KIK loves interacting with its users. KIK has implemented KIK Points for letting users buy stickers, gave them a chance to spend 5 Kikmas days (Christmas with KIK). Kik has presented the Cupidon advisor chat, set up a contest for the best movie script written in emoticons, etc.

Apart from the “virtual” activities, KIK has taken part in the SXSW conference whose purpose was to allow startups to exchange their experience. The messaging company also sponsored the Crimes Against Children conference in Dallas, US.

What KIK does is that it shows that the messenger team is full of interesting people, who want to change the world for the future both online and offline.