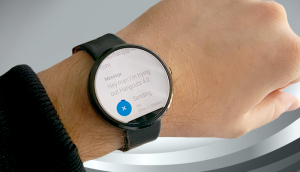 The IT crowd has not yet made up its mind on how it feel about smart watches. Some companies see a new way of interacting with clients and an incentive to develop their products. Others, however, are skeptical about the latest gadget. For example, WhatsApp and Facebook Messenger aren’t rushing to release versions of their product for the Apple Watch, as they believe that the smart watch is not compatible with the messaging services.

HipChat, on the contrary, recently put a smile on Android Wear users by presenting the voice message function.

Google Hangouts is going to follow in its footsteps.

Word has it that Google Hangouts is scheduled to release a fully operating app for Android Wear after all. Users will be able to select accounts, view conversations, as well as post smileys and leave voice messages.

In order to get the latter function to work, users will have to login to Hangouts, say “ОК, Google”, name the desired contact and dictate the text. To refresh your memory, the other day an update for Google Now came out with the option to send voice messages to third-party messaging app using the same command. 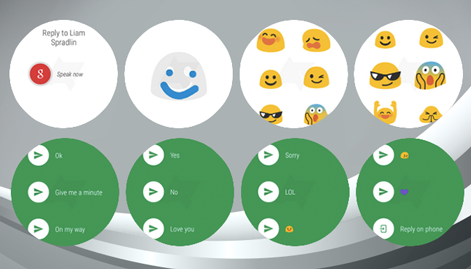 At first, English will be the only supported language for voice commands in Google Hangouts for Android Wear, but, fortunately, Google promised not to stop there.

The exact release date is still unknown. The app is, probably, not ready to see the light of day and needs finishing touches. But the functionality is definitely worth the wait.