The popular corporate messaging app HipChat is known for always trying to focus on the needs of its customers. Not long ago, the company releases a version of its app compatible with the Android Wear, which came as a pleasant surprise for smart watch owners. This gadget is an absolute favorite among workers of the IT field, and, luckily, this was the exact target audience of HipChat.

The recent update, voiced by HipChat, centers around emoticons, or their quantity, to be precise.

HipChat decided to get closer to users

Recap, recently developers added a new service to the messaging app that they called Emoticorrect. This service is designed to replace long texts with emoticons. Its main feature is that it cannot be disabled. The team behind the project believes that this is a revolutionary breakthrough that is capable of taking human communication to a whole new level.

The service’s managed to grow on the users, but then they encountered a new problem: lack of emoticons. The offered hundred didn’t quite allow for complete communication. As a result, users started tweeting about the issue. The app’s team rushed to the rescue and packed some interaction just in case.

On July 31, HipChat posted a tweet with the #MoarEmoticons tag. It was a call out to everyone indifferent to the fate the IM’s emoticons, however, they only had time until August 4 to show their support by retweeting the message. The number of retweets determined how many emoticons were to be added to HipChat’s “emotional” array. 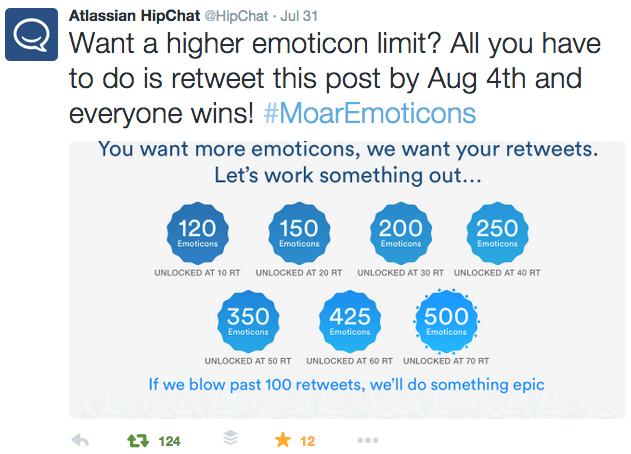 Yesterday, August 5, the results of the vote were tallied up. Turns out users do care about the future of their favorite app and they made over 70 retweets to show for it. Therefore, HipChat couldn’t be happier to fulfil its promise, and now users have 500 emoticons to help them understand each other better and faster!

An excellent creative idea and a great result! This productive team will hands down continue on surprising users in the future.