Last week we covered Snapchat’s plans to make drastic changes to the lineup represented in the Discover tab. Rumor has it that the company was planning to drop its partnership with Warner Music and sign a deal with Buzzfeed and Vox. None of the mentioned companies have officially commented on the news, by the way. However, on July 27 we witnessed the release of Discover’s new face, confirming the aforementioned gossip.

As of Monday, the Discover tab no longer includes Yahoo and Warner Music Group channels. They were instead replaced by iHeartRadio and BuzzFeed.

To recap, Snapchat launched the Discover tab in January. Every channel represented under the Discover tab must publish 5 to 20 stories on a daily basis. The stories could consist of long articles as well as interesting vertical videos. All published content is stored for 24 hours, not 10 seconds. 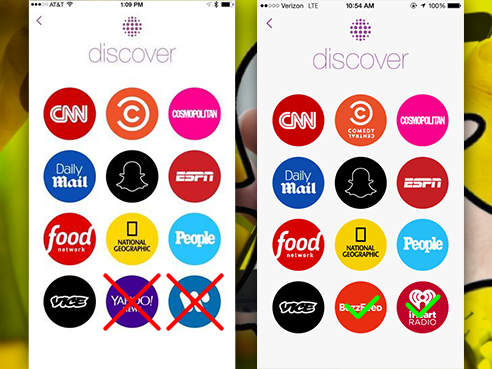 It isn’t yet clear why exactly Snapchat pulled the plug on Warner Music Group and Yahoo. The latter’s spokesperson evasively explained that they are open to partnerships as long as the content reaches the target audience.  Nevertheless, if we face the truth, we can make the assumption that BuzzFeed and iHeartRadio are just more prominent and attract more teens (the messenger’s exact target group), than Yahoo and WMG.

Perhaps, the Discover tab didn’t live up to the expectations of Yahoo and Warner Music Group to increase their popularity among the young audience. Or, maybe, it was the other way around. Maybe the said companies didn’t live up to Snapchat’s high hopes, and were consequently substituted by portals that are more famous. Moreover, in an official statement Snapchat pointed out that the company is currently trying to understand what kind of content suits them best, with the goal of fully satisfying user needs.

BuzzFeed and iHeartRadio are a teen’s best friend?

Obviously, Snapchat is seeking for new ways to interact with users. By partnering with iHeartRadio, Snapchat will provide its users with access to music programs, entertaining news, behind the scenes videos, celebrity interviews and so on. The iHeartRadio channel additionally offers users interactive functions – for example, a photo app that replaces the hair of celebrities with Donald Trump’s toupée.

The second new partner, Buzzfeed, also can’t complain about its level of popularity among the youth. It is everyone’s favorite brand, which generates and provides us with a massive amount of daily fun entertaining content and news.

Therefore, Snapchat is apparently hoping that users will play ball with the newly presented channels on the Discover tab.

You can add channels in Discover’s navigation menu or by scanning the Snapcode.