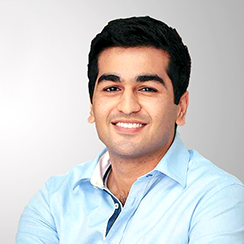 Entrepreneur, programmer, co-founder of AppSpark and projects such as Movies Now and Foodster, Hike founder.

Kavin Bharti Mittal is a young entrepreneur from India, who started his business career in IT back in his college years at the age of 20.

Kavin Mittal is actually the son of Sunil Bharti Mittal, a well-known businessman, owner of India’s largest telecommunications holding Bharti Airtel. Kavin, however, chose not to follow his father’s example and decided to go down Mobile Technologies Avenue.

Mittal studied at the University of York, followed by the Imperial College in London, where he majored in Electrical Engineering and Management. Kavin did more than just pound the books during his studies. He also mastered his profession in practice. To prove that point, he had a lot of internships in his university years at companies such as Google, Goldman Sachs and McLaren Racing. You have to agree that as far as student internships go this is not too shabby at all.

foodster is a mobile app for people, who watch what they eat. It recommends good local restaurants that the user will probably come to like, and then it shares what Foursquare users had to say on the joint.

Movies Now is a mobile movie ticketing app, developed in partnership with movietickets.com. This app was extremely popular and it even made it to the top ten list of most recommended iOS apps (One of the 10 Essential Movie Goer Apps). The success of the app most certainly inspired Kavin to conquer new heights in this field.

Kavin has a motto: “Passion never fails”, which is exactly why he surrounded himself with the same young and ambitious people.

Hike was created in 2012. The messaging app’s current number of sign-ups accounts for more than 35 million people. Kavin Mittal started working on the app in hopes of satisfying the needs of India’s youth (the majority of Hike users are under 25), because he understood they need more than what the West has to offer.

Mittal’s current goal is to bring his user base up to 100 million. The app isn’t taking five: updates come out once a month on average, while the blog is constantly holding various competitions. Long story short: the company is actively engaging with their audience.

We can highlight Hike’s following achievements: Hike launched free voice calls sooner than WhatsApp did, and in July it was voted India’s most popular locally produced messaging app.