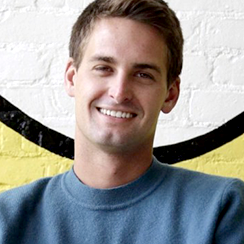 Evan Spiegel is a very controversial personality. It is obvious that in such an early age being in charge of a well-known company is hard enough, as can be observed in Evan’s behaviour.

Evan studied design at the  Otis College of Art and Design, and at the Art Center College of Design in  Pasadena before admission to Stanford. At Crossroads School for Arts and Sciences, same as in Stanford, Spiegel studied product design. However, Evan did not finish his studies.

As a student, Spiegel had an internship as a sales manager for Red Bull, was an intern at a biomedical center, a career instructor in Cape Town, and also worked on a TxtWeb project. Rather a strange set of skills for a future CEO.

Snapchat is a product of joint efforts of Evan Spiegel, Reggie Brown and Bobby Murphy, using which you can share photos. The main feature of the messenger is that a photo will disappear in a few seconds after being received, thus ensuring the security of personal data.

An interesting fact is that Spiegel drew the Snapchat logo himself one evening at home. It seems to be quite a spontaneous decision at the first sight, but no. When choosing a color scheme of the messenger the boys were guided by the statistics: no application on the App Store top-30 was yellow.

The first 6 months after the release were the most difficult for the creators. According to Evan, no one was using the application at all.

However, already in May 2012, 25 photos per second were forwarded via messenger. This drew the attention of the messenger market leaders to the app. Zuckerberg offered Spiegel to meet and discuss future business plans.

In a private conversation Zuckerberg told Spiegel about a new Facebook product – Poke, which, in Zuckerberg’s opinion, would destroy Snapchat. This alerted Evan Spiegel and Bobby Murphy. But a few days, decided the fate of the two competing products. It took the Poke app one day to get into the top of downloads on the App Store. It would seem that Zuckerberg won the dispute, but after 4 days, Snapchat outdid Poke. This incident explains Zuckerberg’s offer to buy the startup for $3 billion, which at that time had no monetization strategy for the product. Everyone knows that Evan said no.

Not all was so smooth in the Snapchat history. Reggie Brown left the company in 2011. But after the application gained popularity in 2013, Brown pressed charges against Snapchat stating that he also owned part of the company. The court case was resolved in favor of the Spiegel team, but they decided to let Reggie maintain the title of a Snapchat co-founder.

Developing in several directions at once, Snapchat team has introduced their own additional content: Snapkidz , Discovery, Snapchat Stories, Snapcodes, geofilters, video ads, etc. Giving an interview in Cannes, Evan Spiegel said that Snapchat was not going to stop just there, and the team is already working on several new features.