KABOOM – A CURIOUS ALTERNATIVE TO SNAPCHAT

Kaboom messenger is going to be a fine alternative for those who want to use Snapchat but do not feel like binding themselves to one platform. The app is available for devices that run on Android and iOS.

Having installed Kaboom just once, a user will not have trouble getting friends to join: you can send messages via other apps. What’s more, messages there are limited to a certain ‘life-span’. The messages self-destruct after the period set by the user expires. It is interesting that you can set not only the time for message self-destruction but also a fixed number of views for it.

The services that can be used within the messaging app include Facebook, Twitter and WhatsApp. You can also send regular SMS or e-mails. When typing a message in Kaboom, a user is also given a secure https address and after that he can set the self-destruction period and the number of views for the message. Only after that does he send it to another user.

How Kaboom came into existence

The app was made by AnchorFree, but this company is more famous thanks to the Hotspot Shield service. It lets you create private virtual communications networks. The company set up by David Gorodyansky, a Russian-born American entrepreneur and business angel, became popular particularly thanks to this product. It has over 350 M downloads all over the world and got over $53 M of investments from Goldman Sachs within Round C. 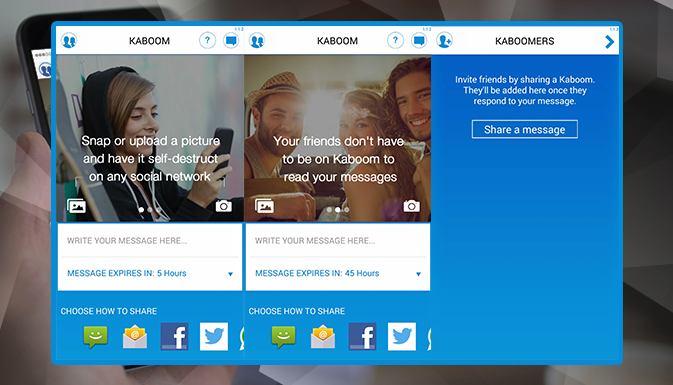 The head of AnchorFree himself says that the problem of other messaging apps is that they demand that all users give up other platforms for the sake of their own and make it the only one. He reckons that this approach is wrong. His company does not want to create another Facebook or force people to give up other messaging apps. AnchorFree just wants to add more security and give the control back to the users of other apps.