Apps that allow users to send messages to people around them constitute a new trend in the world of messengers.

Young people are open to everything new; they no longer can be impressed by usual chat apps for talking with friends. The creators of the so-called “hyperlocal” Spray messaging app have decided to take a new path.

Hyperlocal message exchange assumes that a user can communicate only with those who are located in a certain area. Such things are very popular among students who organize parties or other social events and want to attract as many people as possible.

What is the standout feature of Spray?

The new messenger lets you message users located 1,000 feet around you. The Spraydius is what the messenger team calls this distance. You do not have to know other users’ phone number, their e-mail address, nickname in social networks or other contact information. The recipients just need to have the app installed on their phones and to be online not far from you.

Yik Yak messenger uses the same principle, but users there do not know who they receive messages from.

To start a chat in Spray, you need to have an account in it. You have to indicate your current phone number and nothing more.

Spray team believes that it will be easier for people from the same environment to set up contacts, make new friends or organise various events if they start chatting in the messaging app.

This brings back memories of the times when people spent a lot of time in local chats (urban or student ones). 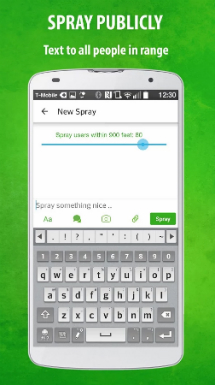 Who is the target audience of Spray?

The team behind the messenger believes that Spray will be beneficial for following groups of users:

The messaging app was tested at the campus of the University of San Francisco. It became very popular among first-year students, since it allowed them to ask questions to second and third-year students, their teachers and university personnel.

Spray also acted as a partner of several music festivals. Among them: Music City’s Battle of the Bands, Scene Unseen IV and Phono del Sol.

This has let the messaging app find another way to show its worth: Spray has shown itself as a great communication method between musicians and their fans in real time.

Spray: what are the future steps?

So far, the messaging app does not support videos; however, the messenger team states that this option will be available soon and users will be able to share their thoughts and new ideas in a more “interactive” format. 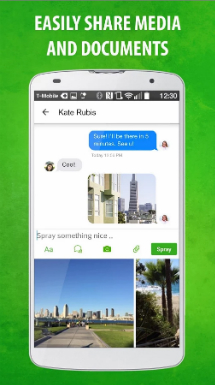 Users can download the app via Google Play and iTunes. The developers also plan to make a Windows Phone version but they didn’t name an exact date of release. However, it has been reported that they are going to focus more on the iOS and Android versions in order to compete with other messaging apps more easily.