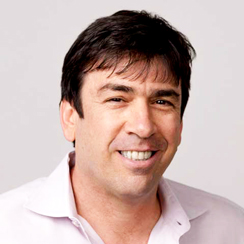 Co-Founder and CEO of Tango

Uri Raz is a co-founder and CEO of TangoME messaging company that has produced a messaging app Tango for video communication between users around the whole world.
Uri is a natural entrepreneur and an Internet visionary who founded plenty of successful corporations.
Before he set up Tango in September 2009, Uri spent two years working on the Dyyno video streaming project.
From 2000 to 2005 Uri Raz was the CEO of AppStream, which also he had founded. In 2006 the company was bought by Symantec.
From 1995 to 1999 the Tango creator was in the position of CEO at Golden Screens Interactive Technologies. Ness Technologies bought it in 2002.
Uri graduated from Israel Institute of Technology with flying colours. He is the owner of several patents. Currently lives in San Francisco.
Speaking of Tango, the developer got the idea of creating the app because he wanted to find the best way to stay in touch with his family, who lived in different parts of the world. He realized that video calls are the right solution for it. However, if he needed to create a multi-platform product, in order to be the leader in this market sector.
Together with his colleague from TangoME, Eric Setton, they came up with an idea for the messaging app. Within the first 10 days of the launch, Tango got over 1 million downloads. Today the app has got around 250 M users.

Tango is a free software for exchanging messages of various types. Before you start working with it, a registration through your mobile phone number is required. You search for new contacts in the messenger based on the same principle.
The app supports chats for two or group chats. Users may send text messages, A/V calls, images and smileys.
Besides, the app offers several elements of a social network: a newsfeed that shows what your friends or communities publish, groups on various topics, and different types of games.
The messenger has a PC version, which was launched later than the mobile one. Thanks to a user-friendly interface, Tango has acquired a multi-million user base.