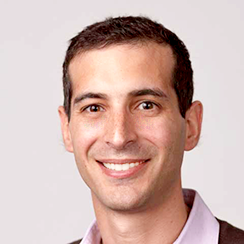 He is an entrepreneur, programming engineer, co-founder of Dyyno, Tango, author of the book Peer-to-Peer Video Streaming, owner of 6 patents for various inventions in the instant messaging sphere.

Eric Setton is a co-founder and the chief technical officer at the Tango messenger. He is a unique person who combines scientific research and a profitable job he loves. What he has also done is that he gave millions of people a chance to keep easy and cheap video connection with their families.

Eric is a real expert in his field. His approach to the VoIP technology is completely new. A holder of a B.S. degree from Ecole Polytechnique in France and a Ph.D. from Stanford University, US, he decided to work with the technology of communications upon his graduation. He has got over 30 academic research works in the Internet-communications sphere behind his belt. He is also an inventor of over 40 various services. Eric personally has got six patents.

Eric Setton’s other achievements include the Peer-to-Peer Video Streaming book, which both students and pros will find interesting. In this book, Setton tells readers how to improve the quality of video broadcasting, decrease the number of errors in the system and holdups in the video signal.

Before he founded Tango, Eric Setton was the CTO at Dyyno. This service helps companies or individuals exchange and manage their multimedia content. It is available in 140 countries and Xfire (part of the MTV channel) was even one of its customers.

This messaging app was founded in 2009 by Eric Setton and Uri Raz. Both founders have families. The way they looked at the issue is that it is very important to stay in touch with your beloved people. It was especially important for Eric, who was a young father back then. For this particular reason, the two engineers did their best to make video calling easier to access. Setton and Raz decided to focus on a mobile app, since a small device is much easier to carry around than a heavy laptop. And you do not have to wait for a call, sitting at your desktop PC.

Eric Setton acted as the chief technologist, which is quite understandable, considering his knowledge and skills. Upon taking the CTO position in 2009, he remains on it up to now.

Tango messenger became available in 2010 on a few platforms at once and acquired 1 million users within the first ten days of work.

It should be noticed that the founders were aware of the risks that were waiting for them. But Setton was sure that an emphasis should be made on making the app available on mobile devices and on making the app a cross-platform one. In one of his interviews, Setton said that any similar startup has to make its app suitable for 70 models of various gadgets, the way Tango has done. Eric Setton has done his utmost to ensure the app has some ‘intelligence’: it adapts the speed of data transmission and that of the quality of calling.

Such a messaging app indeed has a chance to stay popular with a large mass of users for a long while, since it is based on reliable technologies of A/V calling that are being constantly improved and also on an intention to make a beneficial product for users.