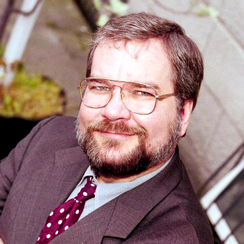 Philip Zimmermann was born on February 12, 1954 in Camden, New Jersey. In 1978, Philip graduated from Florida Atlantic University, where he studied computer science.

For the next twenty years, he dedicated himself to this field, focusing on such an area as cryptography. Simultaneously, he worked as a military policy analyst and software engineer in two different places.

1984, this man came up with an idea of making PGP (Pretty Good Privacy) software, the goal of which was not only to protect the rights of US citizens but to protect the US government interests too.

Seven years after, he released a program and uploaded it to the Internet in free access.

Soon after that, PGP leaked abroad but Zimmermann insisted he had nothing to do with it.
Right after Philip released the product, he and his PGP technology got the attention of the US government. It had an impression that the unrestricted spread of the software went against the US export laws. The software engineer managed to find a clever way out of the trouble – he published the source code in a book. According to the first amendment to the US Constitution, distribution of books does not break any laws. Thus, any interested party was able to copy or change the source code and use it to their own benefit. In 1996, the investigation was closed. In the same year, the developer founded PGP Inc, and a year later Network Associates Inc bought it. Another five years later, it was given to PGP Corporation.

Despite the unfavourable circumstances, the Pretty Good Privacy program became one of the most popular encryption technologies to use with electronic data.

In late 2011, Zimmermann and two of his friends became abscessed with an idea to make a completely secure messaging app. A year later, they set up a Silent Circle company that published unique applications for online communication called Silent Phone and Silent Text.

Currently, along with running the company, Philip is also providing advisory services to numerous companies working in the encryption field.

Silent Text is a fully secure messenger app, which uses the popular P2P encryption technology (messages are not stored on servers but in the gadget’s cache).

The app was made three years ago by three developers, two of who used to be Seals.

The service allows sending text apps, locations, and files of up to 100 MB.

For those users who are focused on data security, the developers have implemented an option of clearing the message history. You can program data to self-destruct automatically, after a fixed time period.

The app works only on iOS and Android. Among the drawbacks are paid subscription ($10 per months) and a too complicated interface (when signing in, a user has to enter an activation code).