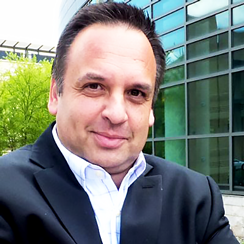 Co-Founder and CTO of Wickr

Robert Statica is an information security and technology expert with over 25 years of experience under his belt.

Robert holds a PhD and Master of Science in Computer Science.

Once Robert received all the necessary knowledge, he started mastering and perfecting it in practice.

Statica took part in designing the SSC (Super-Conductor, Super-Collider) which is a project of the U.S. Government that was launched with the goal of creating the world’s largest particle accelerator.

Later on, his destiny took a turn towards the military sector. He became the CTO of the first intelligent IPS (Intrusion Prevention System) capable of eliminating threats targeting the US Army.

After that experience, Robert focused all of his knowledge and efforts on the private sector. He occupied executive positions at several tech companies while working on innovations and developments.

Robert is the director and founder of the Center for Information Protection at NJIT that is engaged in computer forensics and cyber security.

Currently, Rob is the co-founder and CTO at Wickr Inc. where he is in charge of core algorithm design. In addition, he is the co-author of Wickr’s technology patents.

Wickr is an online communication app that is 100% secure according to developers. It only takes a minute to create and fill out your profile info on Wickr. You can look for other users in Wickr’s system only by entering their personal email or handle.

Transfer images, text messages, video and audio clips, as well as PDF files without worrying about third parties getting ahold of them. By activating just one command, all sent and received messages are deleted from the devices of your conversation partners and from the data storage server as well.

You can go to app settings to select when or how often you want the app to clear your conversation history.

If Wickr mobile isn’t enough for you, try the app’s desktop version.