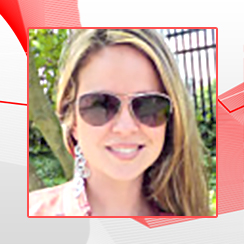 Co-Founder and CPO of Wickr

Kara Coppa is a top expert in the information security sphere with over 15 years of professional experience in this field. This woman was in charge of securing governmental information, threat detection and response.

She also played a great part participating in military missions for the US, and made a great contribution to the country’s finance and telecommunications fields, namely Kara conducted risk research and assessment.

However, she gave most of her time to Wickr Inc. As one of the founders and CPO, she is the chief figure responsible for technological innovations and for supervising security systems. Kara owns numerous certificated and is a co-author of a few Wickr’s patents.

Before that, Coppa cooperated with financial agencies helping them to implement information security software. She took an important part in creation of threat detecting systems.

Prior to that, Kara performed security clearance from the US Department of Defense. For a few years, she monitored and secured the major operations centre in support of military operations. Under her supervision, the first intrusion prevention system (IPS) at a US military base was deployed.

Kara Coppa holds a Bachelor degree and a Master’s degree in “Information systems”.

Wickr is a secret messaging app allowing to send text messages, audio/video files, images and PDF-files (only for iOS users).

Users can be sure that the information they send is very well-encrypted.

Messages delivered by Wickr are not stored on the server and do not contain data about the name of the user or his location. What’s more, the sender can clear not only the cache of his phone but also the memory space of the recipient’s phone. You can set a time period, after which the information will be removed. Thus, you do not have to worry about the safety of the data you send – no one will be able to save it to another device or make a screenshot.

Before you start using the app, you have to complete a simple registration procedure. To start a chat, a user has to enter the e-mail address of his chat partner or his nickname.

The only issue that can be irritating is that the app requires users to enter a password virtually for every action. You won’t even be able to read a message without having to enter a captcha first. The developers have made an emphasis on security and it has its price.