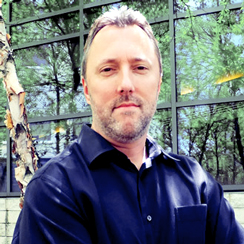 CIO and Co-founder of Wickr

Chris Howell is a co-founder of the Wickr messaging app, whose release took place in the summer of 2012. At the moment, Chris holds the position of the CIO at Wickr Inc, he supervises the inner architecture of the service. Howell’s professional experience in this sphere exceeds 20 years.

Before taking part in founding Wickr, Chris gave almost ten years of his life to working in law-enforcement agencies. In one of those governmental agencies, he was in charge of the cybercrime investigation department and worked as a forensics investigator.

After his loyal work for the government, he spent a few years working in the finance industry where he was busy providing information security.
As a top-level advisor in this sphere, Howell assisted numerous Fortune 100 corporations, including governmental ones, in ensuring the highest-level security for applications.

Chris Howell holds a Bachelor of Science degree in Computer Science and a Master’s degree in Information Assurance.
This person has numerous certificates and is a co-author of several Wickr patents.

According to the recent reports, Chris resides in San Francisco.

Wickr is a convenient and secure messaging app created by five US developers.
The app offers an opportunity of a fully anonymous exchange of audio/video files and images along with sending text and voice messages. The declared anonymity is ensured by means of a military-grade encryption, where several security protocols are used.

The key feature of the app is the self-destruction of messages and delivered files (they disappear from the server) after a set time period (from 3 seconds to 6 days). The data vanishes from the gadgets of all chatters, of whom a chat can contain up to 10. In this case, the information still can be restored from the cache of the device. For those who does not find this good enough, there is a function that is the mobile equivalent of a paper shredder – it erases the removed files permanently from the memory.

Since the app was specially created not to leave any traces for abusers, the development team decided not to implement stickers or any elements from social networks.
Curiously enough, to gain users’ trust for Wickr, last year the developers launched an interesting offer. $100,000 will be given to a person who manages to find a bug in the app, which breaks the total-confidentiality principle.

At the moment, Wickr takes a fair place in the list of the world’s top secure messaging apps.