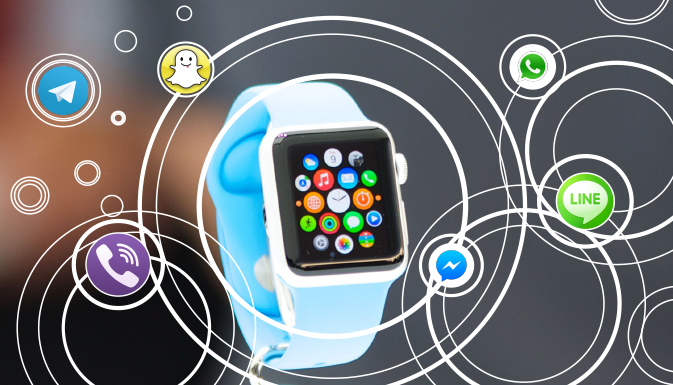 The newly released iOS 8.2 platform has marked a new trend in developing apps that Apple Watch will support.

Not only the smart watch shows the time but also receives notifications about incoming SMS, calls, messages in social networks, etc. This is an entirely new stamping ground for IM apps. Nevertheless, not all apps were prepared to the Apple’s release and some companies deliberately refused to optimize their products for Apple Watch.

Presently, there are several messaging apps, which the smart watch supports: WeChat, Line, Messenger, Glide, Whim, WatchMe, Skype, Voxer, Vonage. These IM apps have their unique features in mobile versions; however, the features they offer in Apple Watch are just a few.

Since Apple is still developing API for sending voice messages, none of the messengers can accept incoming calls so far. So what exactly are the options available on the watch right now? Here they are:

Most messaging apps offer you to make drafts of your replies to messages in the app’s mobile version. This helps to send out replies as quickly as possible without typing the text. Remember that the watch does not have a keyboard. So you will first have to pronounce the text along with all the punctuation and after that you will send it as a text or voice message.

Every messaging company has tried to preserve the uniqueness of its product even in the app’s version for Apple Watch. E.g., WeChat lets its users view and put likes to Moments, read the recent chats and visit their friends’ pages. Line has uploaded its famous stickers to the new version of the app. Glide and WatchMe Messengers allow you to see the first several seconds of a video that has been sent to you by a friend. Whim will let you view your favourite GIF-images. Skype, Voxer and Vonage are so far offering only notifications.

There is also the Force Touch technology, which will estimate how hard you press the watch screen, and can be called innovative. Apple Watch reacts not only to touching but also to how hard your touch is. It is enough to press the smart watch screen a little harder and the app currently active on the screen will offer you some extra opportunities. In Messenger, in this case you can change the colour of animated emojis.

However, the “all on your wrist” concept does not suit all messaging apps. E.g., Snapchat has intentionally refused to adapt itself for the smart watch. Evan Spiegel, the CEO, said that it’s pointless to view a 300-pixel picture on your watch if you can see it in a much better format on your phone.

Certainly, there soon will be many more messaging apps adapted for Apple Watch and in the future apps will expand the number of their communication features. One could argue on that point or open a discussion about the future of Apple Watch; however, the sales figures of the device for Q1 2015 are pretty informative – three million units. That’s why soon we will just enjoy the releases of other messengers for the smart watch.