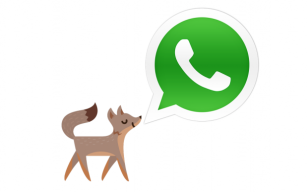 Messaging apps are the most popular ones in the mobile applications’ market. Snapchat is valued at around $20 billion. Exactly a year ago, in mid-February 2014, nobody could imagine anything like this. So, when Zuckerberg announced that his social network would buy a messaging service that is hardly known, US pundits began to ask themselves whether the Facebook CEO has gone bonkers. Well, he’s perfectly fine.

WhatsApp made Facebook’s position in the international market much stronger. If a competitor as big and influential as Google had bought it instead, Facebook would have been in big trouble.

Instead, Facebook now is in possession of the most widely used messaging service in the world. This was the way Zuckerberg eliminated the largest threat to its world domination of social networking.

Chat App is a Mobile Portal

Messaging apps are the ones that are most frequently opened by users. True, you can spend much more time scrolling through your timeline in Facebook, Twitter or Instagram. However, short and frequent sessions in messaging apps suggest that these apps are to be used for different purposes. They are much more valuable than it may seem at the first sight.

So, what do you do to monetize chat? That’s a tricky one. You can only make money on stickers. Charging too much for something in advance in the IM market is impossible because there is too much competition. Moreover, sessions are too short to show adverts. However, as platforms or portals apps contain huge potential for making money.

Asian players are confirming this. E.g. Chinese IM app WeChat allows its users to call a cab, make payment to pals, buy tickets to the cinema, etc, etc. Japanese Line app comes along with Line Pay, Line TV and their own game platform. Why hassle with several different applications, memorise passwords and history of payments if you take care of it all using just one app?

Following its peers, Snapchat is also attempting to expand and be more than just a chat app. Its new Stories feature was introduced to let users broadcast photos and videos. The Snapcash feature that this app offers helps you to make payments easily. Its new Discover portal is a place where content in the Snapchat format from top-level companies is collected.

Loads of pundits asked themselves how Facebook would be making money on its new IM app, taking into account that Zuckerberg is totally against showing adverts and the symbolic fee to sign up is only 1 dollar and only in several markets. This question is simple to answer: there will be no monetization. On the contrary, putting aside adverts and paid content, Facebook can keep chat clean and simple, while targeting monetization on other issues.

It is no secret that Facebook offered a deal to acquire Snapchat for an approximate price of $3 billion. In retrospective, it is clear that the price was not the right one. Snapchat CEO said no thanks, and all what Facebook had done since that to copy the app has been a failure.

Currently Snapchat is attempting to raise $500 million with the company valuation amounting to $20 billion. Their feature called Stories can compete rather well with Facebook’s Newsfeed. As for Discover, it potentially offers an excellent opportunity for monetization, should it become popular. Currently, Snapchat is positioning itself as the response of young people to their parents’ social networks.

Snapchat used to be a snag for Facebook and it used to prevent it from gaining more users. This made Zuckerberg acquire the more cooperative WhatsApp, which can indeed compete with the young people app at the global level.

If some IT mega company purchases a startup that has gained popularity, users immediately begin to express their negative attitude and there are also worries that customers will begin jump off. However, for how many times we have seen that if the parent company allows the startup to lead at list a little bit independent policy, then it will get some new resources and its fans will hold on to it.

The number of constant Instagram users was 30,000,000 when it was purchased by Facebook for $1 billion. Now the social network for photos enjoys over 300,000,000 users and Citigroup has given it an evaluation of $35 billion.

Some shareholders and early fans of Kickstart began to complain when Oculus Rift sold itself to Facebook. However, since then the Oculus Rift has grown into a top virtual reality platform. CEO Brendan Iribe then said that back then the purchase deal with Facebook allowed them to attract some serious developers; it made them confident that Oculus would not go bankrupt or be kicked out of business.

Since Facebook acquired Parse (a platform for developers), the number of apps has increased from 60,000 to 500,000. Flurry is flourishing under Yahoo. Vine did not lose a single customer after it was bought by Twitter.

The fact of Facebook purchasing WhatsApp was not going to and did not destroy the app. The IM service continued to expand – if the initial number of users was 450,000,000 monthly users, then last year it increased to 700,000,000.

Having failed to get hold of this tool, Google seems to have lost the messaging app war. Since Facebook lets WhatsApp follow an independent policy, Zuckerberg has been able to focus on its own Messenger, and Facebook’s number of users has grown to 500,000,000.

WhatsApp has become widely used in poor countries where SMS are too pricey to send. Since user income is pretty low there, it’s rather hard to monetize them with adverts. And here WhatsApp assist Zuckerberg’s social network – by letting it use mobile payments which are very popular in countries like Africa.

If WhatsApp had remained on its own or sold to Facebook’s competitors, it would have been a great danger for the world’s biggest social network. Apart from massaging, WhatsApp provides users with an option to update their status. Those statuses resemble posts that users publish on their Facebook timeline.

It’s hard to say for definite when WhatsApp is going to start earning any big profit. One thing is for sure – AOL and Yahoo got upped due to be often used as portals offering plenty of services. These days, this baton has been passed to messaging apps and the largest one belongs to Facebook.