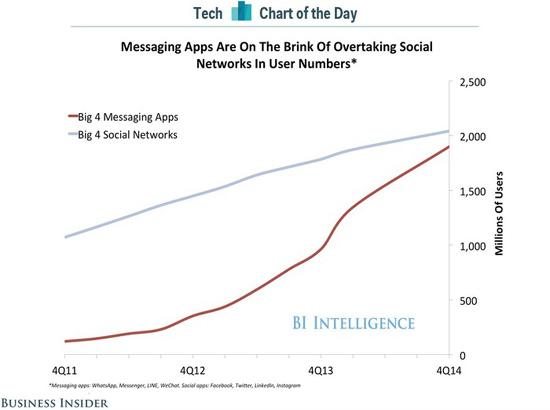 The analytical portal Business Insider, presented some newsworthy information. Over the last three years the growth rate of the four largest social networks has dropped, which is displayed on the chart by the lavender curve. In the meantime, the four major instant messengers, whose growth is displayed by the red curve, are soaring up. Currently, these two groups are almost tied in terms of audience, but this year a game changer is expected – people will use messengers more than social networks. The aforementioned comparison of indicators, proposed by financial expert Fred Wilson, is not quite correct, at least in view of the fact that the audiences of these two Internet-phenomena overlap (for example, one of the four chosen messengers is the Facebook Messenger). In general, no one dared deny this trend. People do tend to communicate by means that require minimal cost in terms of mechanics. In this respect messengers have a promising outlook, as an improved and more functional alternative to texting.

Safety is the second aspect that prefers the use of instant messaging to social networks. It’s no surprise that 91% of Facebook users, the largest social network there is, consider it unsafe, and their personal information subject to leaks.

Thirdly, today’s youth is largely leaving the social network arena, because their parents are registering accounts. It sounds silly, but based on last year’s study, conducted by the analytic firm Frank N. Magid Associates, one can speak with certainty about the existence of such a mass phenomenon. The younger generation wants to avoid being controlled and always want to be be one step ahead, completely contradicts to the current trend of more and more adults beginning to use social networks.

As a result, we can say that 2015 will be the year of growth and increasing competition on the market of safe messengers. New players will really have to try to conquer their audience.