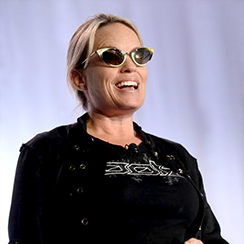 Nico Sell is the best-known woman in North America working with personal data security issues. The media loves calling her the “sunglasses-clad advocate of security”. Journalist do have a serious reason for that – little is known about Nico and her eyes are always hidden behind a pair of sunglasses. She does not have profiles in social networks or a Wikipedia page. The Internet is filled with reviews of her articles. Despite all this, Nico Sell says that she has taken the whole blow of publicity for the Wickr messenger team.

All that we know about Nico is that she used to do snowboarding and is a Darmouth graduate, where she studied management with a focus on nuclear strategy.

After graduating, she got a job with Palm Computing on the Palm Pilot project – a personal digital assistant that for a short while became more popular than mobile phones. She also took part in making the popular Real.com website.

The turning point for Nico Sell was 1999 when she decided the time had come to work for herself. She created Montara Mountain, a consulting company for startups. Sell consulted over 20 startups. Through this work she got to know some companies specializing on security issues. As a result, she got involved with DEF CON, an annual conference of “white hat hackers”. Nico Sell has been helping to organise this event for 15 years already. Within this time, the circle of her acquaintances got much wider and now it includes lawyers, advisors, FBI agents, hackers and other security experts.

Nico’s new friends helped her set up a nonprofit organization for children called “r00tz Asylum”. In that club children between the age of 8 and 16 are taught how to hack their neighbour’s phone or stop an panoramic wheel using their smartphone. This is by no means a new terrorist organization, on the contrary, Nico believes that in this way she can give the new generation an idea that their personal data can also be stolen and used against them.

In 2012, Nico and four other people founded a company that produced a secure messaging app Wickr. Nico Sell took the position of CEO. In May 2015, the enterprise decided to split into Wickr Inc. and Wickr Foundation. Wickr Inc. chose a commercial path and got a new CEO. As for Wickr Foundation headed by Nico, it became a nonprofit organization on user data protection.

When doing business, Sell sticks to the “achieve the goal or die trying” policy. She does not mind where her employee is or what he/she is doing. All she wants is that he/she does the job perfectly.

Under Nico’s management, the technology used by Wickr caught the attention of many journalists, politicians, public figures and so on. After Snapchat user data got leaked in 2014, Wickr sheltered the disappointed user base.

With Wickr you can send encrypted self-destructing messages, as well as photos and videos. The messages and phone numbers aren’t kept on Wickr servers, making it impossible to satisfy any government inquiries into user data.