Snapchat is introducing a new function that will allow its users to save Snaps and Stories indefinitely. The new function is called Memories and can be accessed just below the Camera screen – all you need to do is swipe up.

Memories comes with the Search. “It’s super easy to find the Snap or Story you’re looking for in just a few seconds by typing keywords like “dog” or “Hawaii” — that way you can spend less time searching and more time enjoying your Memories. You can use Memories to create new Stories from Snaps you’ve taken, or even combine different Stories into a longer narrative! It’s fun to celebrate an anniversary or birthday by finding a few old Snaps and stringing them together into a new Story,” said Snapchat.

Furthermore, users will now be able to use photos and videos from their Camera Roll, whereas earlier only snaps taken in the app could be used. If you are posting a Snap taken more than a day ago or adding it to a story, it will appear with a frame so that everyone knows it’s from the past.

As for the privacy concerns, the users will be able to move Snaps and Stories they want to keep private to the My Eyes Only. Memories will be stored on Snapchat servers, and not on users’ devices. Since this is a rather significant update and the company is still perfecting its way of securely saving Snaps and Stories on its servers, the new function will be rolling out gradually over the next month. 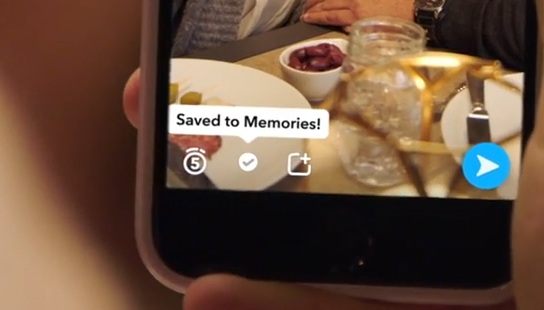 Noteworthy, Snapchat topped the rating of most popular apps for iOS in May based on the results of a study by App Annie. The app remains highly popular among the youth, although the number of an older audience (aged 24-44) has grown significantly over the past 12 months.