At its annual F8 Conference in San Francisco, Facebook announced the launch of the Messenger Platform with bots, currently running in beta version and Send / Receive API.

“We announced new technology like Messenger bots that use artificial intelligence to make it easier to communicate with businesses. Now you’ll be able to send messages to a business like you do with a friend – and get a quick reply without taking your full attention or requiring you to install a new app,” wrote Facebook CEO Mark Zuckerberg on his page following his keynote speech at the conference.

“Do you know anybody who likes to order services via a telephone? Nobody wants to install new apps for each service they are interested in. It seems we have found a way to solve this problem,” said Zuckerberg, noting that chat bots can replace telephone and online requests for services and become a more convenient way of interaction. 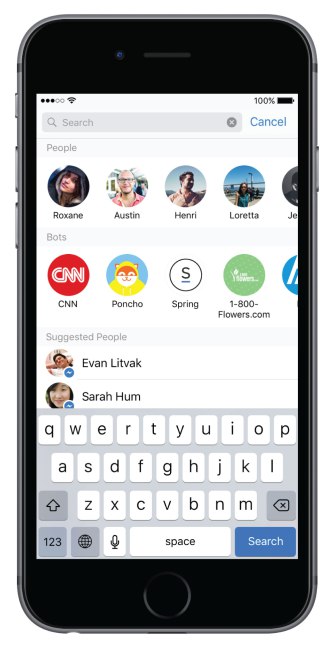 Bots can provide anything from automated subscription content like weather and traffic updates, to customized communications like receipts, shipping notifications, and live automated messages all by interacting directly with the people who want to get them.

Zuckerberg explained that with AI and natural language processing combined with human help, people will be able to talk to Messenger bots just like they talk to friends.

The Messenger Send / Receive API will support not only sending and receiving text, but also images and interactive rich bubbles containing multiple calls-to-action. You can make a hotel reservation, look though e-commerce offers and jump to the web to pay for the purchase.

Developers will be able to build their own bots or use Facebook’s bot-building partners. Also, Facebook has its own Bot Engine that can be used. After the bots are reviewed and approved by the social network, they will be introduced for all users of the Messenger.

People can discover bots by using the search bar at the top of the Messenger. There are also mute and block communication options, if a user is not interested or doesn’t want to receive messages from a bot.

So far, you can find CNN, 1-800-Flowers, Spring, Poncho and Sequel bots on the Messenger. To converse with them you need to visit their Facebook page and tap ‘Message’. You can also see the list of bots that are being added to the app on the Bots App Store.