Android smartphone users have finally got their dream come true: Google Messenger (do not confuse it with Facebook Messenger) has released updates for the latest 1.3. version. This update allows you to answer received messages really quickly. From now on, the Quick Reply feature will help users communicate in an even faster and more convenient way, because they can give instant replies, without wasting a single precious moment.

The Quick Reply option does not require a user to launch the app. Even if the Messenger is closed, when a message arrives, a small pop-up Reply window will appear on the screen. Once you tap the button in it, a full-screen reply form will appear, in which you can type a text and also add some emojis to it. 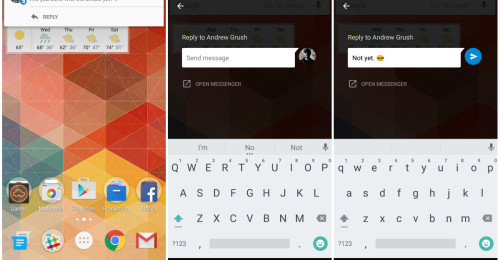 Besides, this window allows you to choose whether to launch the app in full or not.

However, the new option does not cover the transfer of multimedia files. If you want to attach a photo, video, or audio file, you will have to launch the app in full. However, the Quick Reply feature justifies its name quite well – the point is that it helps make a quick reply, but not a full-scale correspondence.

Android fans also hope that soon HangOuts will also release such an option – Google announces some updates almost every Wednesday. 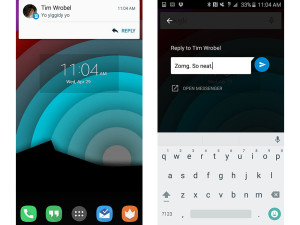 However, the most skilled users, those who have already tested the Google Messenger new feature, have found some drawbacks in it too. For example, when you receive a push notification in iOS apps, a small text entry field appears. And in the Quick Reply Google feature the text entry box covers the whole screen which is rather inconvenient.

Besides, you cannot type a reply in Google Messenger without unblocking the screen. This makes the new option useless in many ways. Because in order to make a real quick reply, you will have to unblock the screen anyway, open the push notification and enter a full-screen mode. Is it not much simpler just to enter the app in a usual manner and use a full functional reply form?