QUICKIE IS APP FOR QUICK CALLS

Let me introduce Quickie – a small stylish app for iOS, which allows making one-to-one calls that break a couple of seconds later on a compulsory basis. You can use this app to tell your pal a joke or wish a good morning to a business partner. Sending a text message will not be as personal as making a voice or a video call. However, these days, when everyone’s so busy calls are unattainable luxury.

“I came up with the idea of making this app due to my frustration with phone calls that take an awful lot of time and the fact that FaceTime was used so rarely. Now you can quickie your friends whenever you want,” says Ben Cera, the app founder.

Before he began working on Quickie, Cera and his team were developing Context and then Facefeed. However, they failed to gain a sufficient number of users for those projects. The team had no choice but to start making another app to change the deteriorating situation. When it was just 7 months to go before running out of money, the team got themselves together and created 6 apps in various spheres: collaborative video, social games and streaming video. They finally decided to leave only Quickie, a very simple app for communicating. 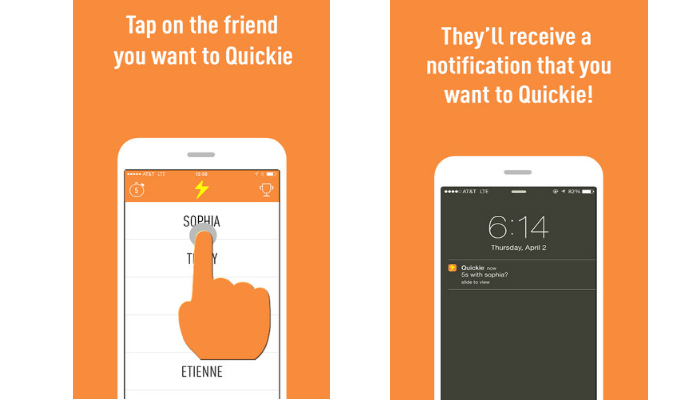 Quickie is a mixture between Snapchat and Yo. When entering the app, the user sees the entire list of his contacts. You can set the Quickie call duration and make a call afterwards. Your friend will be notified and then decide how to respond. If he can’t pick up, he will hear a usual ping, like when receiving a message in Yo.

Once you answer a Quickie, a full-screen call will begin. It won’t be a usual call, however. At the bottom of the screen, you will see the countdown timer, which makes only meaningful conversations sensible. Quickie calls last no more than 60 seconds.

All of this much more personal, than simply receiving a video sent to you in Snapchat, since you are aware that your friend is talking to no one else but you. You can communicate live and see each other’s reaction. True, Snapchat offers video calling but only few people seem to use it. Video calls themselves are by no means a first; however, Quickie is a refreshing take on this market.