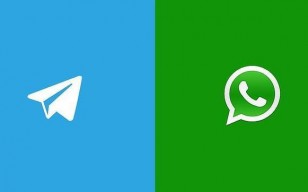 Jan Koum’s and Durov brothers’ messaging apps are in special kind of relations.

We have written about Pavel’s predictions and his scalding tweets, and that Koum accused Pavel of being able only to steal technologies but failing to create any of his own.

Simultaneously with their intense arguments, Russian Telegram made a clever use of setbacks suffered by its famous competitor.

The first time it happened was after the sensational purchase of WhatsApp. While celebrating the 22-billion deal, WhatsApp “crashed” for a few hours. Searching for an alternative, users came across Russian Telegram.

Yeah, right… Why announce contests to prove that one is heavily protected, release updates with photo editing software inside the app, if you can just wait for WhatsApp to crash

Yesterday, the situation repeated itself and Russian Telegram gained 2.5 M users. This time it wasn’t about WhatsApp crashing, though. There was a different case:

Brazilian state authorities are strongly against end-to-end encryption because it prevents them from “keeping up security”. Back in 2013, WhatsApp rejected cooperation with the local authorities, taking care of its reputation and confidentiality. It would be suitable to say that the government reacted immediately but the reaction was pretty slow. Only two years later, on February 11, a judge from the Brazilian state of Piaui made a verdict, which prohibited WhatsApp. Mobile operators were not in a rush to “execute the sentence”. WhatsApp reps filed an appeal and a superior court cancelled the verdict.

Despite the fact that WhatsApp is operating, there is no guarantee that this epopeia with trials is over. Bearing this in mind, users decided to find an alternative and here, just as it was last time, Telegram showed up. Right on time. The latter has also got a Portuguese language version, by the way.

2,5 million new Brazilian users today so far. Some users in the region may have issues with photos, but most problems should be gone by now.

Even though Russian Telegram won this time, they should not flatter itself – law-enforcement agencies of Brazil will probably want to cooperate with them too.