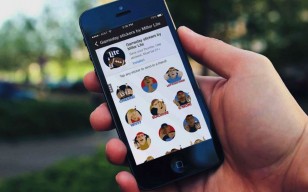 Everyone has heard of Monotype without even realizing it. The corporation is the rights holder of such popular fonts as Helvetica and Times New Roman. Among their customers are Coca-Cola, Microsoft, IBM, FIFA, Intel, Nestlé, and Nike. This giant, founded back in 1887, every major era of type, formatting, and fonts.

We make it easy to read. Easy to read everywhere.

A startup founded in 2012, previously known as TextPride. They are turning emojis into cash. Working with three hundred brands and fifty platforms, the company makes branded stickers and emojis, promoting and selling them via messaging apps.

Swyft has 11 people on its payroll and they have a 2-billion messenger users’ audience. They designed stickers for Viber, Facebook Messenger, Kik, BBM (Blackberry messenger).

The company’s sources of income include stickers and emojis.

Now messengers are becoming extremely popular. According to forecasts, by late 2015 messaging apps will be more popular than social networks. A standard ad scheme is not a suitable monetization option for them – adverts are the last thing you want to see in your chat window.

Trying other monetization methods, Tango sends you ads with incoming messages, WeChat makes a profit on games and stickers, Kik offers its users chatting with brand reps, and SnapChat has made a separate Discover feature where users can see videos from brands made in the SnapChat format.

As for Swyft, brands pay it for branded stickers, which users of messaging apps send each other. Imagine the Championship League Final for which Swyft releases two sticker packs – brands pay for that, users buy them, and profit goes to Swyft and messaging apps.

How much did it cost?

This purchase cost Monotype $12 mln with $15 mln to be paid later, provided that Swyft fulfills its contractual obligations and achieves the set targets.

This merge will be beneficial for both parties. It will give Monotype a chance to develop a taste of “font style” in emoticon lovers and Swyft gets in its disposal a large base of publishers through which the messaging app’s path to the hearts of young audience will become easier.