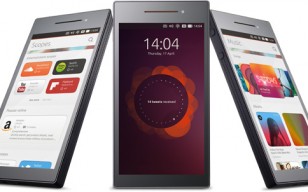 Ubuntu Phone new device, positioning itself as a communicator and a media streaming player, will be available for €170 in a few weeks.

This project became interesting thanks to its developers, who also produce Canonical operating systems. As far as performance and features go the price is justified: 2 sim-cards, 4.5-inch screen (540×960 pixels), 1GB of RAM and a quad-core processor clocked at 1.3GHz, 5-megapixel front-facing camera and an 8-megapixel rear camera, in addition to fully running HTML5. Let’s jump ahead to something a bit more in our lane: Pavel Durov’s Russian Telegram IM is among the default apps running on the newly-presented device.

Judging by the look of things we can make a pretty accurate guess as to how Pavel decided to make money off of his product. He decided not to take the high road of its Asian competition that creates entire IT ecosystems around their message exchanging apps. There is also no pressure on in-app purchases. Perhaps, exclusive pre-installment deals with the new Ubuntu Phone will help the most publicly-known protected instant messenger get even further ahead.