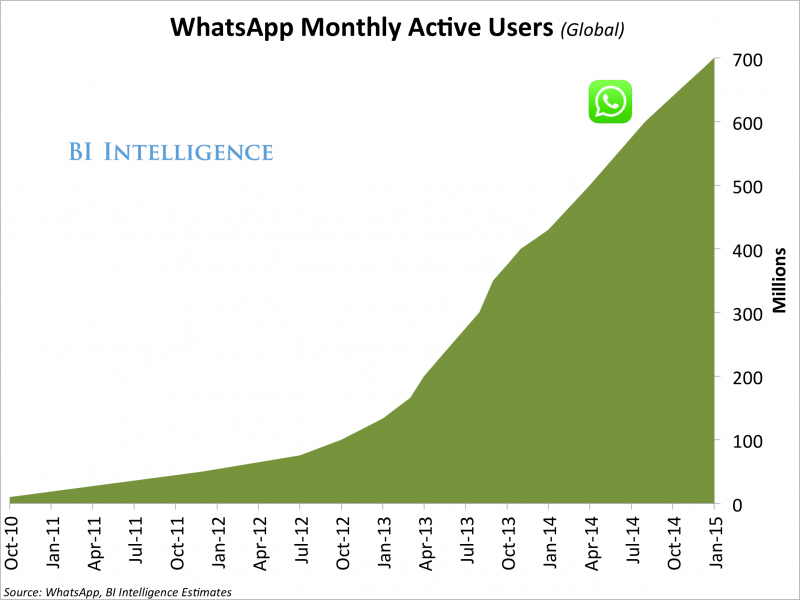 In mid-2013 WhatsApp pleased its supporters with some pleasant numbers – 200 million people are happily using or logging on to the service at least once a month. In April of the same year another piece of information swept the media – a half a billion active WhatsApp users. At the time analysts had doubts regarding the messenger’s further growth. These concerns were related to frequent server crashes and shutdowns.

Now, moving on to more recent events, we can only state the obvious: WhatsApp has surpassed yet another milestone — 700 million people actively use the app and send out more than 30 billion messages on a daily basis. Thus, in spite of the paid subscription and the amount of competitors, more and more people are favoring the “US SMS Assassin”. This roaring success shouldn’t come as a surprise if you consider the strong growth of the messenger’s popularity among the Russian-speaking audience. There has also been a significant increase of users from Latin America and India. We should note the fact that 90% of Spanish-speaking smartphone users prefer WhatsApp to short text messages. Apparently, the Hispanic community has acquired quite a taste for this messenger. We can only predict how quickly WhatsApp will get its first billion, given the forthcoming introduction of voice calls.

Recalling WhatsApp’s nearest “pursuers”, it is worth noting such eastern messengers as WeChat and Line. These two have a hypothetical chance of gaining on WhatsApp if they combine their efforts and users (around 400 million users each). Viber and Tango are next in line, contenting themselves with 200 million users each.